The family association Schrader e.V. forms a union of persons, who all carry the name Schrader, or have carried as birth name.
The individual members are not all related to each other, but are nevertheless connected by the common name and its origin in the Braunschweig area.

Through its extensive archives, the “Familienverband Schrader e.V.” is an important source for family research.

Within the Schrader family association, all persons who can be traced back to a common oldest ancestor are assigned to a clan.
The clan is named after the birthplace of this oldest ancestor.
Thus, the clan names are always geographical designations indicating the place of origin of the corresponding clan.
The clan name is added to the surname Schrader as an additional name (double name) for better distinction of the almost all members with the same name, but has no legal meaning.

Soon after that Dr. Emil Schrader-Badeleben and since 1909 also Otto Schrader-Königslutter devoted themselves to genealogy.

At that time, it was thought possible that all Schraders could be traced back to a common ancestor with intensive research.

After World War I, a small working group was formed in 1919 and 1920 between Schrader researchers Richard Schrader-Hornburg, Dr. Hans Schrader-Thale, and Hermann Schrader-Derenburg, to which Emil Schrader-Badeleben contributed his records from 1909-11.

After the family history material was initially exchanged by circulation, however, the desire to get to know each other personally soon arose.

On 27.12.1920 the cousins Richard, Hans and Hermann met in Berlin-Spandau.
They decided to found the family association and called this meeting the first family day.

After the foundation on the first family day on 27.12.1920 the family federation existed first as not legally responsible association.

As a result of the rapid increase in the number of members, the statutes presented by Hans Schrader-Thale were adopted at the 2nd Family Day in Berlin in 1921, which specified Berlin as the seat of the association in § 2.
According to § 3, anyone who received the name Schrader through descent or marriage could become a member.

The most important change was the relocation of the headquarters to Braunschweig, i.e. to the center of the “Schrader area”.

The registration in Berlin was cancelled after 47 years and was made on 20.05.1969 at the district court of Braunschweig under the number VR 2664.

Another important change was the expansion of membership to include the husbands of a Schrader by birth and Schrader descendants in the female line.

The statutes of the registered association form the basis of the work of the Schrade r e.V. family association.

“The purpose of the association, which was initiated in 1911 and founded in 1920 under the name “Family Association Schrader”, is to encourage family-historical research on all families with the name Schrader, also with nobility predicate or other additions, to pass on the results of the research to the descendants, to promote the association members and to cultivate the idea of togetherness. The association is politically and denominationally independent.” 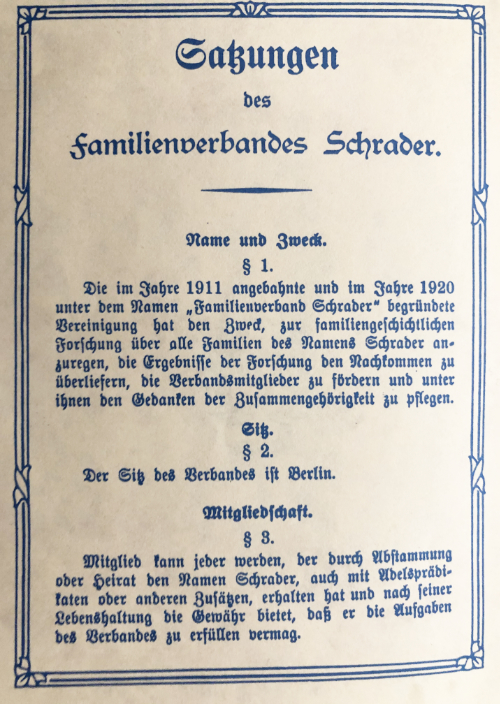 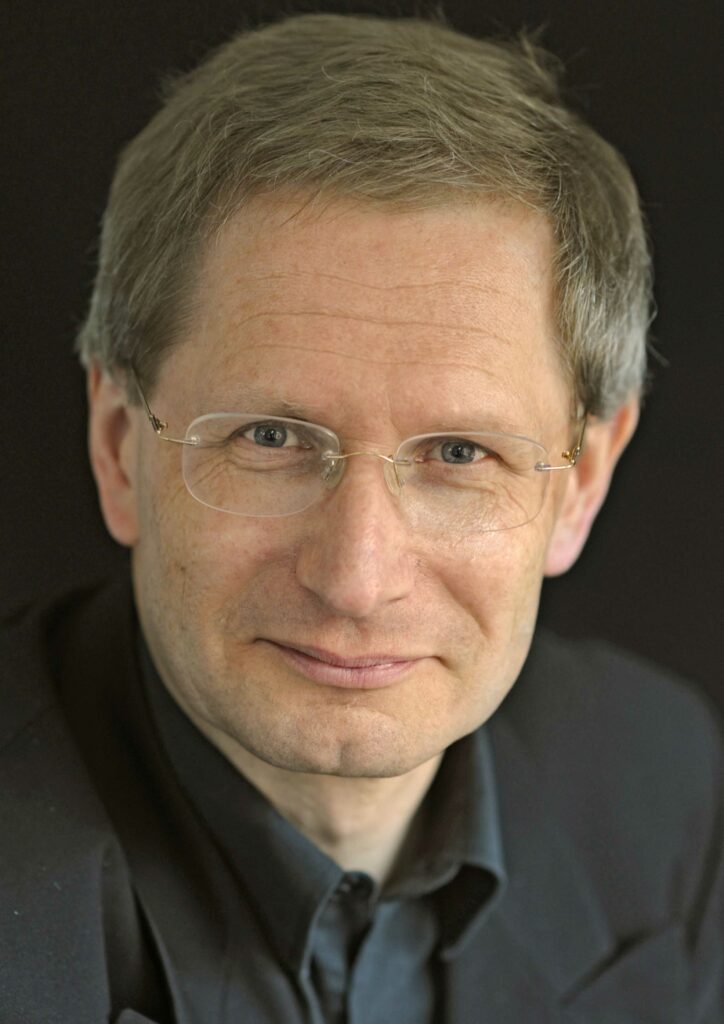 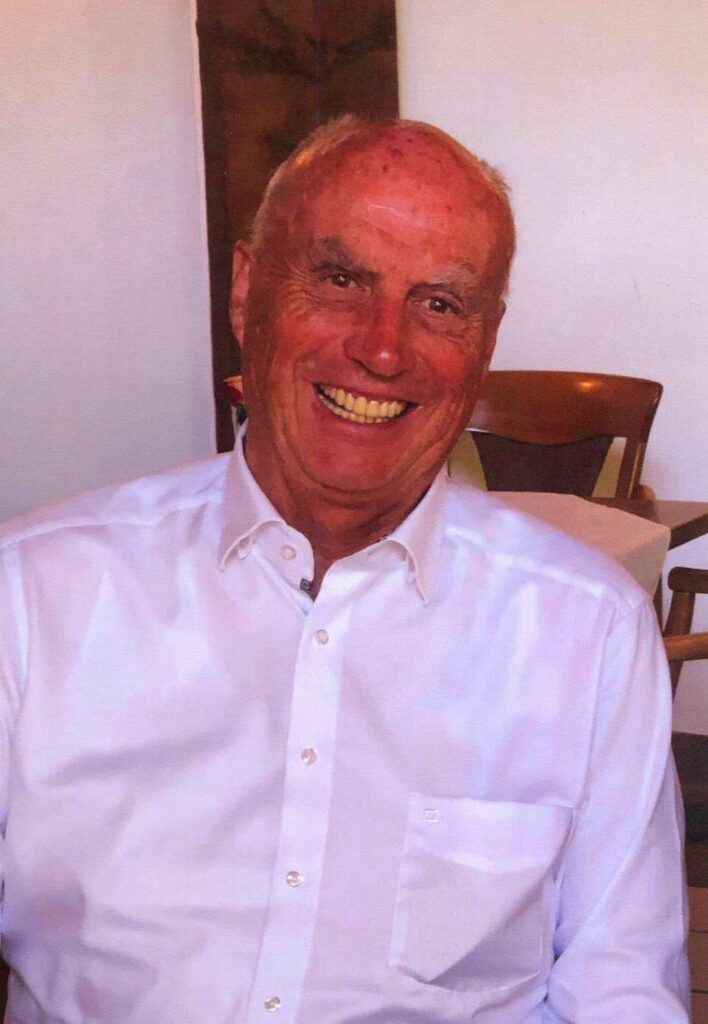 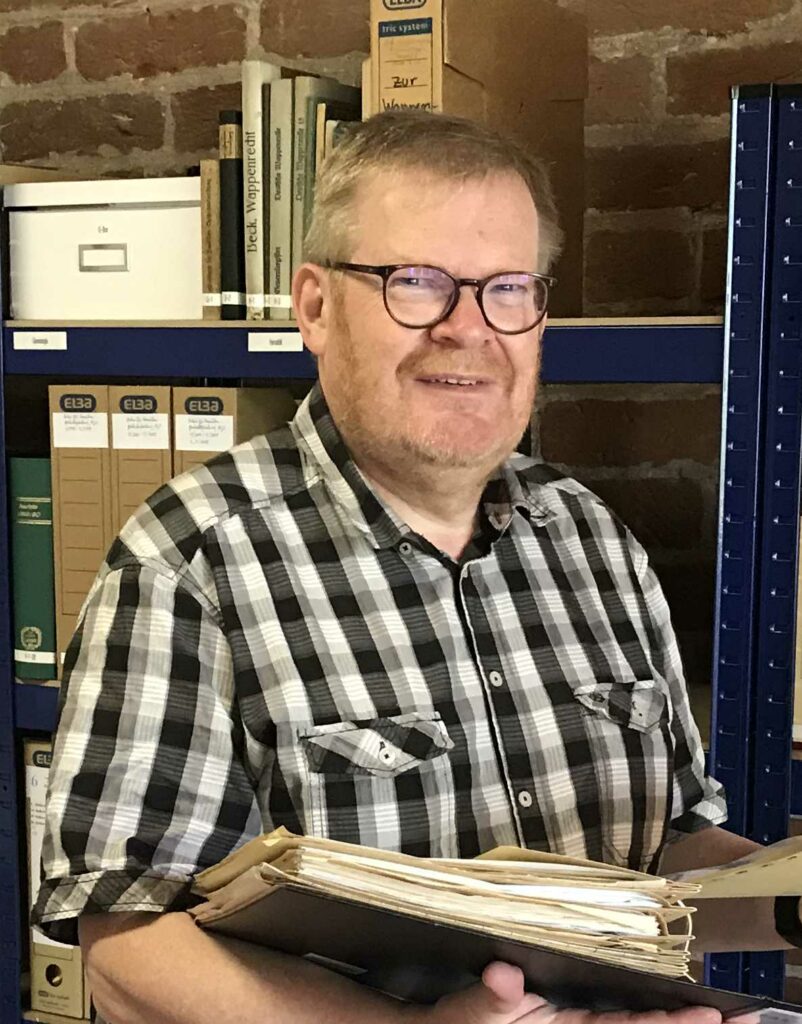 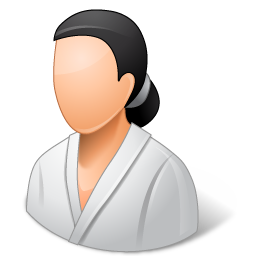 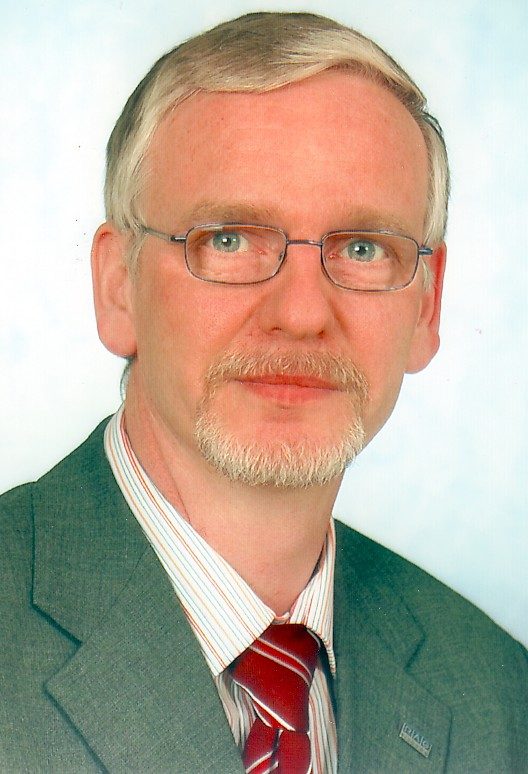 The association coat of arms

The picture, a pen and ink drawing applied to cardboard and colored with watercolors, is an undated and unsigned original.

On the motto there is the triangular shield with a corn fork standing on a triple mountain, which is accompanied by two six-pointed stars.
The shield is held by two defiant, upright animals, a lion (left) and a griffin (right).
Of the five helmets, each with helmet cover and crest, the three in the middle rest on the shield, the outer ones on the paw and muzzle of the respective shield holder.

The direction of the board members’ gaze is toward the sheaf of grains and toward the stars that accompany them, that is, toward all members of the association.”